All Collections
From the product desk
Features
Attention! Where to start…

Attention! Where to start…

Written by Elliebot
Updated over a week ago

Let’s face it, there is a lot to unpack when it comes to Attention data, especially if this type of data is new to you. With growing interest in Attention data in the media industry today, we get all sorts of questions about how Attention data works.

First things first, what is Attention data at Element Human?

Attention data is the result of tracking people’s eye movement to help us determine if they are indeed keeping their eyes on-screen and what in particular is holding their gaze whilst watching a video.

From there, our Attention model, developed in-house by our Data Scientists, uses this data to predict where people are looking on the screen. This algorithm powers 3 main features in our dashboards:

To test the accuracy of our model, we asked 490 humans to take a custom survey in which we asked them to do one task: follow a pong ball around their screen and count the number of times it changed colour. This task is designed to have participants pay close attention to the ball's position, which we used as a proxy for true gaze coordinates.

The hypothesis is that there is a strong correlation between the accuracy of a participant’s colour-change count and how close the person's predicted gaze is to the ball's position. To put it simply, for a person to keep an accurate count, they should be watching the ball's movement closely.

In terms of demographics, all 490 participants were from the United Kingdom. The gender distribution was 51% Female, 49% Male, and 0.2% Other. 58% of people took the survey using a PC device and 42% used a mobile device.

This study resulted in an attention score of 87 out of 100, which means that, on average, people were looking at the video 87% of the time. So we can reliably say that our participants were paying close attention to the ball's movement. Most importantly, the heatmap clearly shows the trend of people watching the pong ball move around the screen.

As the video progresses, the heatmap starts to deviate slightly from the ball's exact position to the area in front of the ball. There could be many reasons for this difference, but our data science team's analysis concludes that this is an example where people began to predict the ball's movement.

After reviewing the data, the original hypothesis appears to hold true as shown by the graph below. The team concluded that there is a significant difference in answer accuracy (answering the question, 'How many times the ball changed colour?’) between people who were paying attention (the 'predicted gaze distance from ball' is small) and those who weren't. 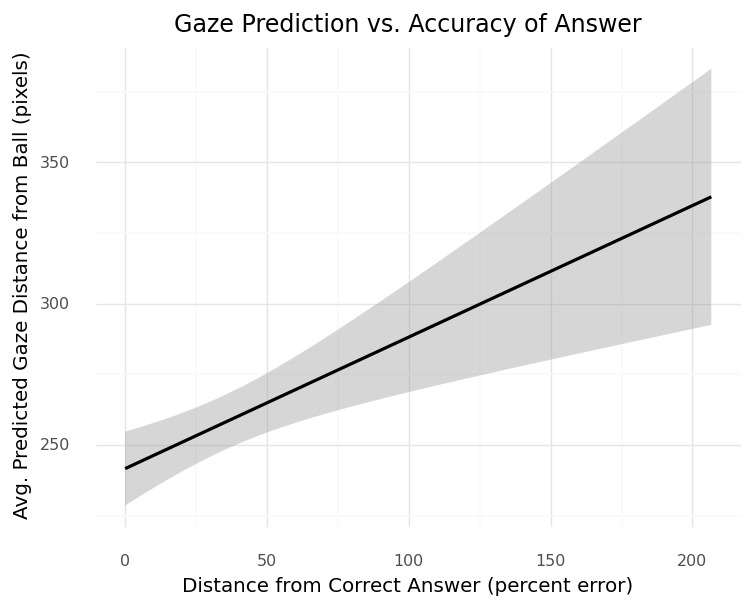 Relationship between answer error and predicted gaze distance from target

Here are the 3 things we learned from this experiment:

Did this answer your question?